2019 Workers of the Year Celebrated at VIR Runoffs 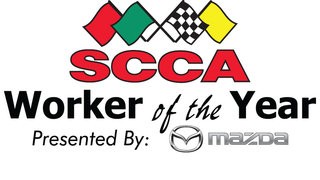 ALTON, Va. (Oct. 11, 2019) -- From the Runoffs to the Hoosier Racing Tire Super Tour, U.S. Majors Tour to regional weekends, SCCA® road racing events are made possible thanks to the tremendous effort of SCCA workers.  And each year a handful of workers are recognized for their enormous contribution.  Those individuals are bestowed with Worker of the Year honors, presented by Mazda.

"When you combine both national and regional activities, more than 200 road racing events are conducted across the United States by the Sports Car Club of America each year,” said Michael Cobb, SCCA President & CEO. “That colossal mission just couldn’t be achieved without the thousands of highly skilled and incredibly helpful volunteers who are part of this Club. Worker of the Year awards identify a handful of these devoted volunteers. To the winners and absolutely everyone who helped pull off 2019 SCCA events, I can’t say ‘thank you’ enough for your passion and involvement.”

Award recipients have shown dedication throughout the season to their Specialty, events, Region, competitors, fellow workers and the SCCA; exhibited strong skills, good leadership, and a willingness to go above and beyond what is expected; and provide excellent customer service to everyone encountered.  SCCA members submitted Worker of the Year nominations, and winners were then selected by the SCCA National staff with input from Division leadership.

The Flagging and Communications Worker of the Year is North Carolina Region’s Heather Clark. During her service to the SCCA Clark has served on the Region board, been Flag Chief and Assistant Chief for the last three years, and her experience and attitude has earned her the respect of fellow workers and drivers as she took on the role of a teacher and leader.

Cal Club’s Tracy Roper is the Grid & Pits Worker of the Year. Roper, who attended her first Runoffs® only a couple of years ago, has left a deep impression on the Club by never missing a race with her local region, being one of the first to arrive and always looking for more responsibility and things to learn.

Elizabeth Thiel, of Finger Lakes Region, has taken “plays well with others” to new heights in earning the Worker of the Year award for Race Administration. Theil presents a positive, professional attitude with track management, workers, drivers and partners as she handles the routine and not-so-routine events which pop up on race weekends for regions, the SCCA U.S. Majors Tour and Hoosier Racing Tire SCCA Super Tour.

A 29-year SCCA member, New England Region’s Terry Roberts is the Registration Worker of the Year, an honor earned by being a wonderful ambassador to the SCCA at and away from the track in her years of service. At the track, Roberts has worked all over the East Coast in both Northeast and Southeast Divisions, and she has been a staple at the Runoffs® for more than a decade. Off track, Roberts’ can-do attitude has been flexed by coordinating annual meetings and serving as the Divisional Administrator.

The 2019 Scrutineering Worker of the Year is the “contagiously warm” Bernie Novak of San Francisco Region. Novak has participated in SCCA events as a scrutineer since 2011 and is known for her planning and coordination while interacting with drivers and fellow workers with a smile. Outside of her specialty, Novak has also gotten her competition license and participated in the Tire Rack Time Trials National Tour powered by Hagerty in a continuing quest to spread her enthusiasm on and off track.

Larry Kurkowski holds many specialty licenses, but it’s his time in the start stand which has earned this Florida Region member the SCCA Starter of the Year. On the way to the honor, this 36-year SCCA member has worked events from Florida to Minnesota and served on the Runoffs start team since 2008 as Assistant Chief and then Chief Starter.

The humility, grace, thoughtfulness and patience of Washington D.C. Region member Steve Pence has earned him the title of Steward Worker of the Year. Pence, who now splits his stewarding time between SCCA and FIA, has spent time in the SCCA as a driver, instructor, flagger, steward and Majors and Hoosier Super Tour Race Director. In each of those positions, Pence has garnered respect through transparent and sincere communication.

Steel Cities Region member Jeff Hutzelman is the Timing & Scoring Worker of the Year. Hutzelman strives to serve the SCCA wherever and whenever needed, working frequently out of division and at the Runoffs® setting examples for others with his dedication. It is Hutzelman’s delivery of excellence which leads him and the rest of the Worker of the Year group as shining examples of the SCCA spirit.

The Sports Car Club of America®, Inc., founded in 1944, is a 67,500-member motorsports organization that incorporates all facets of autocross, rally and road racing at both Club and professional levels. With headquarters in Topeka, Kansas, the SCCA annually sanctions over 2,000 events through its 115 Regions and subsidiary divisions. Much of the SCCA’s activities are made possible with support from the following Official Partners: Hagerty, the Official Insurance Partner of SCCA; Hawk Performance, the Official Brake Products of SCCA; Sunoco, the Official Fuel of SCCA; and Tire Rack, the Official Tire Retailer of SCCA. To learn more, please visit www.scca.com.